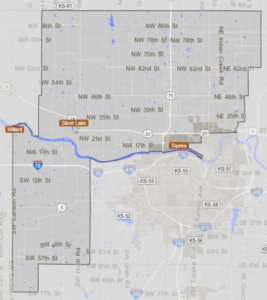 House District 50 is located in northern and western Shawnee County, Kansas. The District encompasses approximately 214 square miles. It contains two incorporated cities, Willard (2010 population of 92) and Silver Lake (2010 population of 1,439), as well as a small portion of Topeka. The District is mixed rural and urban in character with population concentrated primarily in the eastern portion. District 50 includes all of one school district, and portions of 6 other school districts.